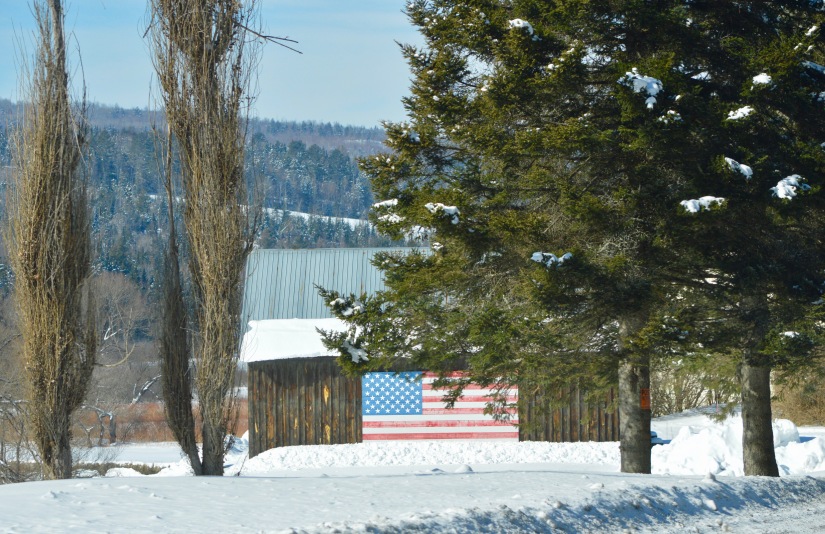 I’ve spent the past week working on an article (cover story, July 2020 Editor & Publisher magazine), for which I’ve spoken to news editors around the country, to better understand how they’ve managed through months of pandemic – and now, during protests and civil unrest. It feels like crisis on top of crisis on top of crisis for news organizations already fiscally challenged, with newsrooms gutted.

It got me thinking about life here in northern Vermont, and how communities have managed through the protests and pandemic.

Last week, a group of students from an international boarding school in St. Johnsbury staged a protest, and maybe a hundred local residents came out to demonstrate their frustration with the disproportionate number of police shootings and killings at the expense of black families. The incident was not without its own strife. There were a few arrests of protesters who blocked the entrance to the local police station. One overzealous officer manhandled a tiny sprite of a woman, tossing her like a doll down the concrete stairs leading to the entrance.

By the next day, the small town had returned to its sleepy status. The protesters had been replaced by a small group of maybe a dozen “Blue Lives Matter” counter protesters, who planted themselves on the sidewalk in front of the station, hoping for honks from passing cars, in support of cops. It didn’t surprise me, this kind of support for the men and women in blue. Here, as in most small towns across the country, cops aren’t wooed from other towns; here, the officers live in the community. They know everyone, and everyone knows them. This kind of co-dependent relationship makes it untenable for the police to overreach their authority, and it makes citizens more respectful of the force made of their neighbors and family members.

Crime is, of course, a little different here. The local paper’s crime blotter this week reported a local man over in Burke who was arrested for pelting a woman with eggs after a night of, admittedly, excessive drinking.

Only about half of the residents you see milling about in towns, or driving to and from them, sport “PPE.” You won’t see many N95 masks. More often than not, they have the cloth kind that someone stitched by hand, or bandanas wrapped snug. I saw a man yesterday who was heading into a local pharmacy with a grimy, old white t-shirt haphazardly wrapped around his face and tied in the back. At least he was trying to be accountable to his community.

It’s not that the others are unaware of COVID-19. It’s not like they don’t take it seriously. The local health clinic always has a full parking lot, and the low-tech “website” for our town – a metal billboard at the end of our dirt road – reminds people of the risks and to socially distance themselves, as if that were even a choice.

It’s more likely that people here are simply nonplussed by it. There is a sense that, no matter what happens here, that life will go on, that poverty will endure.

I’ve been introduced to a number of residents who came here from Connecticut, where I still live full time. Each has a similar story – that they came north for a more idyllic perspective, an active lifestyle – snowmobiling, hunting, fishing – and to escape oppressive taxes. But what they found in northern Vermont is that life’s challenges simply take on a new form.

From the previous owner of my little cabin, I inherited some relationships with a couple of locals who help me maintain the land. The local town selectman is my plow guy. He maintains the town roads for a living, and plows out the driveways of his neighbors for $30 a visit. He automatically shows up anytime we get more than six inches.

I have a young man who comes to shovel paths around the house and to pull the snow off the metal roof when it piles up. His mother is the town clerk a few hollows away. We got to talking during his first visit, and he explained to me how much he loves it here, especially being able to navigate the region by snowmobile during the winter. It’s a practical, affordable and thrilling alternative to automobile transportation.

But he said that he may have to go back down south to Connecticut, after all, because there’s just no opportunity here, no work for him.

He spends his summers doing landscaping and mostly fighting off the dreaded black flies. We called upon him to mow a meadow, because it had gotten high from the spring rains and because we knew he could use the buck.

Back home, I’m used to landscapers showing up with a veritable fleet of vehicles, equipment and personnel. He showed up with a riding mower on in the back of his pickup, its blade and cover dangling precariously off the side of it. Rusted through, he had to hold onto it, guiding it across the grasses and adjusting the height by hand, courtesy of a string he’d tied to it.

It’s hard to invest in your business when jobs are scarce.

For so many Vermonters here, pandemic or not, the barn still needs a new roof they can’t afford; the tractor still needs repairs. The fields around the house need to be groomed, and the ruts in the road – caused by the freeze-and-thaw cycle of mud season – need to be smoothed out. Farm animals and pets still need feed, and rotted wood on the cabins needs to be replaced with whatever scraps of lumber can be found in the shed.

But there are also little pleasures. With spring comes picnics with the family. The woodstoves go cold, while charcoal grills fill the air with the seasonal scent of smoke. Kids run free and play outside, and when night comes – as was the custom in our home growing up – the parents bathe them of the grime and check their heads for ticks.

Joy feels smaller here. Expectations are managed. Passersby aren’t always inclined to smile, but they do wave and nod. Conversations are truncated and efficient. People don’t feel the need to be constantly entertained.

There are no fine dining experiences or nights at the theater to miss – let alone to protest until they “open up.” A date night might take of the form of a retired couple sitting on a front porch and sharing a bottle of wine, watching the occasional truck rumble by. No one is in a rush, after all.

Life is simple by design, by necessity, and by geography. They know the virus will come, and that there’s nothing to do but wait for it and to carry on.

Long before we found ourselves sequestered in the wilds of northern Vermont, I became concerned about moose. Though a friend who lives in Vermont describes them as “the dumbest animals to walk the earth,” I find them quite intriguing – their fortitude, their height and weight, their ability to adapt to harsh conditions, to navigate treacherous forest floors. I appreciate how the mothers care for their young, how they bed down in the snow, and I’m fascinated with how the males annually grow their awe-inspiring racks. The new antlers are covered with a soft velvet as they emerge in the spring, which the moose violently scrape during by September, rubbing them against trees until the bloody velvet falls to the ground, often taking a tree’s bark with it.

I’m intrigued by the annual rut – when hormones are on high – and how the males battle for territory. Men!

I eagerly await the first sound of a moose mating call and would likely squeal with glee if I ever stumble upon a cow and her new calf.

My husband’s coworker is stationed up in Maine. He’s a hearty sort, who spends time at a seasonal camp, hunts, and knows just about everything you need to know about living and surviving in the woods. He’s been a wellspring of information for us this year, as we learn to navigate the forest and coexist with the animals that have now ousted us from the top of our local food chain, as they say on survivalist shows.

A few years back, he bemoaned Maine’s tick problem and reported that the local moose population was being decimated by them. He said the moose up there are literally covered in ticks. Here, too.

I looked into this, and read an article about one account of a moose emerging from the forest with an estimated 80,000 to 90,000 ticks on it. I suppose math was involved in that estimation. I doubt they were picked off and counted, one by one.

Ticks are bad here, too. We have to take extra precautions – for us and for our dog – when we return from time spent outdoors.

The moose population in northern Vermont is reportedly not as plentiful as it once was. Locals here tell us that a decade ago you couldn’t drive around the region without spotting them, and that every landowner had at least one moose roaming the acreage. They were everywhere, and the signs along Vermont’s roads and highways are a testament to that bygone era. I see plenty of signs of moose out on the property – horseshoe-shaped hoof prints in the snow and mud, mounds of almond-shaped scat. But I have yet to spot one for myself. Those that remain in our forest are quite adept at keeping a low profile.

The decrease in the moose population concerned me, and even more so when I heard that Vermont was going to allow a rather generous number of moose-hunt licenses this year – 55 licenses are expected to harvest 33 moose this year.

You might wonder why a person would want to hunt a moose. It’s not for sustenance. Mounted bull moose heads do fetch a pretty penny. In St. Johnsbury, we discovered a place that specializes in all sorts of taxidermy – everything from full-standing bear to kitschy raccoons paired up and placed in little birch canoes, like they’re out for a paddle on a river.

Standing beneath a mounted moose head is humbling perspective, and well-done mounts can cost tens of thousands of dollars. But how many people have that kind of money, room, or the desire to have a moose mount on their living room walls? Is there a market for 33 of them of this year alone, I wondered?

It turns out that the reason for the hunt has nothing to do with big-game prizes, and everything to do with the tick population. If ticks can’t find a host, they move along to where they can. In theory, thinning out the moose also thins out the ticks.

As much as I don’t like the idea of gunning down a beautiful, regal, elusive beast – just out loping around in the forest, minding its own damn business – I can understand this countermeasure. If you think about it, it’s not unlike stay-at-home orders during the time of pandemic. The only way COVID-19 continues to thrive and perpetuate is if it finds readily available hosts.

I don’t know about you, but I’m not anxious to be a human-equivalent tick-covered moose, nor a dead moose. Things may be “opening up” around the country, as the idea of “herd immunity” and “culling the herd” – the sacrificing of vulnerable Americans* – seems to be gaining popularity, but I’m going to stay put for now.

*Vulnerable Americans refers to both the elderly and people with pre-existing, co-morbid conditions. The Department of Health and Human Services estimates that 50 to 129 million NON-ELDERLY Americans have some form of pre-existing health condition.