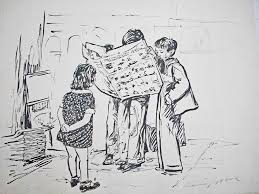 This headline is not true, and yet, it was in this pre-Middle School era of my life when I first began to fully “understand the value of a dollar.”

I find that’s a popular phrase passed down through generations, an invaluable life lesson or a rite of passage. For two sixth-grade classes in the 1970s, their introduction to commerce and capitalism began that week.

That was the year that the number of students had outgrown the school, and some lucky contractor got the local school system bid for providing pop-up classrooms made out of stitched-together double-wide trailers. Two sixth-grade classes shared the one we’d been sentenced to, with a sliding partition between the two groups, each with its own teacher.

The partition was an insufficient barrier that mostly rendered us distracted by what was happening with the kids on the other side. When they laughed, our heads swiveled. When we acted up, they’d go silent and giggle as they listened to our punishment being levied. One teacher would have to raise her voice to keep the attention of her class whenever the sounds of the other teacher seemed more interesting.

And vice versa, and so it went.

Imagine the delight in our little hearts when one day the partition was folded in on itself, the two classrooms of kids facing off at last. The once competitive teachers joined forces and announced that we were going to learn about “the value of money.” They went on to explain that for a period of one week, there would be no traditional classroom lessons and that our trailer would be transformed into a microcosmic town.

Each of us had a role to play in the town. They asked for a show of hands when assigning roles like bankers, retailers, landlords, food purveyors, even insurance carriers.

I was the only one who wanted to run the town’s newspaper.

The town also needed governance and law, and so a show of hands indicated which of my classmates aspired to political life – managing their day-to-day duties while also running for a handful of offices, including mayor and sheriff.

We spent a day or two planning and building the town. Creative cardboard cutouts became our storefronts. Logos were designed, and signs went up over our storefronts. My classmates got right to work. The banker “handprinted” money and distributed a precisely equal amount of cash to each of the town’s residents, so everyone had a level playing field – a comparatively endearing socialist start to what would end in survival-of-the-fittest capitalistic carnage.

The most popular business, by far, was the town baker, who sold decadent treats to a classroom of kids given the freedom to make their own nutritional and expenditure decisions.

We didn’t speak of food allergies back then.

I got right to work wearing all the hats at the newspaper – a lot like things are today.

I had to hock the paper, selling single copies to passersby. I sold advertising and wrote ad copy. I had to distribute the paper when it was hot off the press.

And though everyone wanted to read the paper – mostly to see if they were in it – few wanted to buy the paper. It was hard to compete with Mom-baked brownies.

I spent the week walking around the perimeter of the trailer, interviewing my classmates about the health of their businesses or who they liked in the pending election. I wrote trends pieces about how the town’s residents thought the rent was too damned high and how they wanted to be able to spend more of their money on luxury items, like those chocolately brownies. I vaguely remember writing an expose on the insurance carrier in town, who I saw as a huckster selling vapor.

“People give you money, but what do they really get in return,” I grilled him like I was Woodward or Bernstein.

One by one, the small businesses fell, exiling their owners from town, to a corner of the trailer-classroom to watch an episode of “Free to be You and Me” or to throw a sixth-grade temper tantrum, perhaps.

Naturally, the bank endured; it thrived off of the interest. The insurance carrier – who had minimal overhead costs and a contained, safe environment that put odds in his favor – stayed afloat. The baker had fistfuls of colorful cash by week’s end. And the newspaper endured, though I, too, was pretty busted. By the time I’d covered my own costs – rent, insurance, crayons – I didn’t have enough currency for much else.

I’d spent days coveting my classmates’ disposable income and how they frivolously, happily spent it on baked goods and insurance policies.

Somehow, I’d managed to get the news out, but it wasn’t easy, and it wasn’t lucrative.