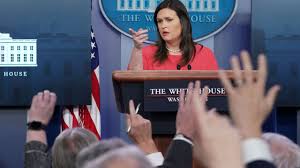 As Sarah Huckabee Sanders’ tenure as the White House Press Secretary wanes, I am cognizant of how much time has passed since she was named to the position, and all of the former Trump Administration personnel and cabinet members she’s seen come and go.

For perspective, it has been 94 days since the Press Secretary held her last official briefing with the White House Press Corp. That’s her primary duty.

Remarkably, Huckabee Sanders has been on the job for nearly two years now, as others have come and gone. Like another familiar Mark Burnett Production, she outwitted and outlasted.

The 36-year-old was born in Hope, Arkansas, hometown to one William Jefferson Clinton. Some might say she had two strikes against her growing up. Her father – Mike Huckabee – was both a preacher and a politician. He is also a musician, so take from that what you will.

The youngest of his children, Sarah grew up in the public purview, and clearly paid close attention to her father’s political maneuvering. She studied political science at university, despite those observations.

Huckabee Sanders isn’t just tough, she’s smart – and almost immediately, she proved measurably sharper, quicker-witted and less inclined to defensive anger than her Press Secretary predecessor. She also proved a good student and a quick study, picking up Trump’s formulaic song-and-dancing nearly out of the gate.

You’ll spot the pattern now, too:

1. Overstate a problem.
2. Credit the Trump as being the only one who can solve it. Speak in grandiose, superlative terms.
3. When asked a question, double down. Restate the problem; restate the President’s solution.
4. When asked again, restate it, more emphatically. Appear annoyed.
5. When challenged again, interrupt and feign offense – as in, how dare you ask me that question/waste my time. Then, insult the questioner, implying that the person is daft, biased or nefariously motivated.
6. Cut off line of questioning.

These rhetorical shell games are second nature to New York-native Trump. They likely didn’t come as easily to an Arkansas gal.

But she applied herself.

If the President is the confidence man, Huckabee Sanders sometimes felt like his hungry street-scrappy eager-to-learn protégé. When she spoke on behalf of the President, it felt practiced, rehearsed, drilled in.

Though the climate in the briefing room might lead spectators to think that there was real deep-seeded animosity between the Press Secretary and the Press, that sentiment perhaps was one-sided. She is, after all, the Press Secretary who refused to denounce her boss’ assertions that media is an “enemy of the people,” while standing in a room with them.

Still, the Press Corps rushes to assemble and sit still before her and raise their hands and ask mostly softball questions, because they’re only granted two.

They didn’t expect her to be a perfectly honest broker. They realize it’s her job to spin. But they do hope for professionalism, access to her, and a baseline agreement that the Press is there as a representative of – not the enemy of — the American people.

Many of Huckabee Sanders’ critics have labeled her a liar and propagandist. They say it as if it’s somehow novel and new. But that’s the job, isn’t it? The President is entitled to have PR representation, after all. That she does it with skill and aplomb is what makes those critics even more infuriated.

Though she proved to be sharp and nimble on her feet, Huckabee Sanders was never smarter nor faster than most of the people wearing Press passes in that room, who detect and adjudicate corruption, slick personality, rhetorical subterfuge and disinformation, day in and day out.

There were plenty of moments when I and others in the media felt kinship with and empathy for the Press Secretary. None of us wished for her to be harassed at a restaurant. If any segment of the population sympathizes with what it’s like to be belittled, verbally assaulted, threatened or even violently victimized just for doing your job, it’s the Press.

In the aftermath of that dinner interruptus, Huckabee Sanders was granted Secret Service protection – a first for a White House Press Secretary – and the incident became just more political nonsense, more American-versus-American cannon fodder. Sadly, she let that happen.

By contrast, Kamala Harris, a sitting U.S. Senator and Presidential candidate had to be protected by MoveOn.org host Karine Jean-Pierre when an animal rights protester recently jumped on stage at a speaking event and grabbed a mic from the Senator’s hand before he was “escorted out.”

None of this behavior is acceptable; that should be a bipartisan position. Sarah missed the opportunity to be the voice to say so.

My most sympathetic-to-Sarah moment came on Anthony Scaramucci’s notorious first day on the job. Cute and dimple-cheeked, with a dazzling smile and a gift of gab that had certainly opened many doors for the new White House Communications Director, Scaramucci brought a guy-you’d-like-to-have-a-beer-with demeanor and convivial candor to the podium.

He immediately squandered all of that favorable equity when he invited the Press Secretary up to the podium with him – fresh from a photo shoot, hair blown out, cheeks thickly rouged, contouring lines cartoonish under the unforgiving lighting, and a smoky eye that became the subject of a joke at the White House Correspondents’ Dinner that year, sparking outrage and forever ending comic participation at the annual event.

I wonder if she thinks about that now – that her hurt feelings smothered a 105-year tradition, an annual event that represents a temporary cease-fire between politicians and Press, in the interest of charity.

I’ve often wondered why her feelings didn’t seem hurt when Scaramucci brought her up on the podium that day and told the world how much more appealing she was with her new vamped-up look. When he advised her to keep the glam squad on staff full time, I cringed. I’m sure I wasn’t the only one.

And she never needed the eyeliner. She was perfectly lovely without all the gunk on her face. More so.

In the end, bad judgment – or karma – got Scaramucci six days later. He was out, but she endured.

Huckabee Sanders didn’t just survive the role, she thrived in it. And, in her, Trump got both an accomplished spin doctor and an Evangelical Whisperer. What the President himself lacks in spirituality and religious discipline, he makes up for with a deep bullpen of zealots. They pray over him and lay hands on him. They anoint him and empower him. And when one of his disciplines speaks to them – no matter the veracity or absurdity of her message to them – they believe her, because she is one of them.

Huckabee Sanders’ legacy as Press Secretary will sadly include a petty crackdown on the White House Press Corps and threats of rescinded press credentials and impeded access. She will also be remembered for lying to the Special Counsel and having to issue a mea culpa for it. If that were you and me, we’d be jailed for perjury.

None of us in news will easily forget the time she knowingly tweeted out a “deep fake” video, to falsely accuse CNN’s Jim Acosta of assaulting a young female aid. It was vicious, and even when she was lambasted for perpetuating it, she refused to delete the video and refused to apologize for the defamatory intent.

There was also the time she denied the United States was detaining kids in cages at the border – despite Jacob Soboroff’s exemplary first-hand reporting to the fact – and later asserted that inhumane border policy, with children dying under our watch, was sanctioned by God because the Bible says people should obey laws.

During Huckabee Sanders’ time as Press Secretary, plenty of us media types have opined about the value to tasking reporters and tech crews to the Briefing Room if the lies are so unvarnished, so garish, so dangerous, that reporting on them – on what she says, on what the President asserts – feels like a betrayal of our oath to accurately and intelligently inform the public. And yet, when Sarah Huckabee Sanders (infrequently) comes to the podium, there they are, ready to fulfill their end of the pact.

Post Huckabee Sanders, the notion of the crafty, calculating, but mostly noble Press Secretary portrayed in The West Wing by Allison Janney seems contrived and romanticized, quaint now – a thing of the past, like black-and-white TVs, paper boys slinging the news, and people who can’t wait to “read all about it.”

It is remarkable that Huckabee Sanders lasted a couple of years in this role – not 3.5 years, as the President alleged in a tweet yesterday. After all, he hasn’t yet been President for that long.

Though she graciously said that the gig was “the honor of a lifetime,” I imagine the constant scrutiny and a mad-king boss might leave a person shaken, exhausted and uncertain how to personally heal and professionally follow it up.

I also imagine that she’ll have some atoning to do, this preacher’s daughter – that is, if lying is still considered sinful per the Baptist Church. Conservative estimates put the President at a remarkable 10,000+ lies told since his inauguration. She echoed thousands of them. Now someone else will.