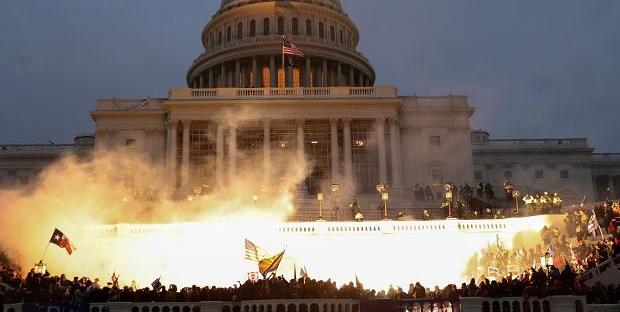 I, like so many other Americans, am still trying to process the assault on our Nation’s Capitol. I am grateful to the many journalists and photojournalists who were the People’s eyes and ears, our witnesses and documentarians to this tragic day in American history.

Thanks to their continued reporting, we’re all able to assess the physical aftermath. The emotional toll, the structural damage to our democracy may take some time to discern and measure.

It was during my digital assessment of the damage that I came upon a tweet from William Turton, a Bloomberg reporter who captured some video as he strolled through a fairly opulent and pricey DC hotel, documenting scores of guests fresh off their storm-the-Capitol tour of Washington, DC.

In the video, they sit casually in groups, chatting and enjoying refreshments, as if they haven’t a care in the world.

Turton, who was also a hotel guest, reported that some of these people followed him, harassed him, and demanded that he erase this footage. The hotel staff had to intervene to protect him.

I knew that hotel, because it was just a couple of years ago when I stayed there with four of my favorite fellas. My husband and I, my brother-in-law, my father-in-law and uncle-in-law all traveled by Amtrak to DC, to attend the beautifully solemn “Evening Parade.”

Every American should make the trip to Washington, DC and attend this seasonal, weekly Friday night event, held on the grounds of the oldest Marine Corps barracks in the United States.

In my case, I had the honor of accompanying two unimpeachable patriots to this particular Friday-night parade: My father-in-law, a WWII Marine Corps vet who served in the South Pacific, and my uncle-in-law, who spent WWII at sea with the U.S. Navy – the two surviving brothers out of the five Peck “boys,” who all enlisted and served their Nation with honor.

Aboard Amtrak, they passed the time playing cards and talking about the last time they’d been to Washington, DC – a seniors’ bus trip that included a stop at the WWII Memorial. Neither had been on a train in years, and they relished the experience – even more so when we arrived at Washington, DC’s famous Union Station and got “first-class golf-cart transportation” from the train to the taxi line outside.

We checked in to our hotel and everyone freshened up before we had to dash off to the Marine Corps event. Arriving at the historic barracks, we saw a long line of people waiting to get in. The USMC estimates that each Evening Parade brings out thousands of spectators. My husband and I looked at each other, silently conveying our worry that his father and uncle – both in their 90s by then – would have to navigate the line and be on their feet for an untold amount of time.

But no sooner had we exited the cab and taken our spot at the back of the line when a fine-looking Marine in full dress blues approached us. My father-in-law was wearing a crisp new USMC Veteran cap we’d bought him at an army-navy store. It only took that sighting of that hat and perhaps the mileage on our men to grab his attention. “Would you do me the honor of being my guest at the Officers’ Club,” he said to my father-in-law, who accepted the invitation with a curious spirit and a little spring in his step.

The handsome Marine led us across the barracks lawns and into a nondescript building, up an impossibly steep set of stairs to the second-story lounge. Soldiers of various officer ranks and attire mingled and imbibed. This, too, seemed like a Friday-night ritual.

We were led to a comfy sectional, and other Marines swooped in to ask what we were drinking. My father-in-law and uncle order glasses of red wine. Neither was ever much of a drinker. Marines came over and introduced themselves and marveled at our Marine’s and Sailor’s ages and at what they must’ve seen and endured during their time at War.

It became obvious to us that one of the Marines in the room was running the show, getting invited guests stoked for the parade to come, and boosting the morale for the in-service men and women present. He came over and introduced himself to our family and asked “the boys” about where and when they served. They exchanged some military quips and inside soldier jokes, and our host turned to the room and called his soldiers to attention, formally introducing their military brothers in the house.

The room erupted in applause and ooh-rahs.

The parade was about to start, so we were told to head on down to the parade grounds and get a good seat. Before we left, one of the Marines came up and pulled me aside and pleaded with me to bring “the boys” back to the Club after the parade. He had something special planned for them, he said, and swore me to secrecy.

It was a perfect late-summer night. It was still hot, but the bugs were gone. The sky was clear, moving from a silky dusk-blue to midnight black, a heavenly made scrim for the performance.

For nearly two hours, we were captivated by the drill demonstrations, historic anecdotes, marching, music, drum lines and trumpets. At the conclusion, we all headed back to the Club, none of us really knowing what to expect.

The Marines who’d spoken with my father-in-law and uncle had listened so astutely to the tales they told of their family, their upbringing, their wartime. They recounted these stories to the quieted crowd of lively Marines and officers from other branches of the service, who applauded and cheered and brought tears to my eyes.

It was recognition hard-fought and long overdue. The sense of camaraderie, brotherhood, and pride was palpable.

While we’d been enjoying the parade, the Officers had printed up certificates and bound them in red silk, acknowledging each of the Peck brothers for their service to the nation. They called my father-in-law up to the front of the room, and he shuffled his way there to accept it. He was asked if he’d like to say a few words. He didn’t hesitate. He’d rehearsed this story on us a thousand times already.

The crowd chuckled, and he continued. “So, my father said to me, ‘Go down the street and see our neighbor. He was a Marine. Ask him what it’s like before you enlist.’ So I did, and he gave me this advice: ‘Keep your eyes open, your mouth closed, and never volunteer for anything.’”

I never entirely appreciated that last part about volunteering, but all those Marines in the room got the drift, and they burst out into laughter and cheers. I was so happy for my father-in-law. He always loved an audience for his stories.

Next up, our uncle made his way to the front to accept his award. He was the only Navy man in the room. He was given his certificate, saluted, and invited to say a few words to the crowd. You could see his chest rise and his back straighten as he thought of what to say.

In his best loud and authoritative voice, he gave them a good old-fashioned Navy-vs-Marine ribbing: “The Marines wouldn’t have gotten anywhere without the Navy,” he declared.

And they adored him for it. The room erupted in cheers and hollers and applause.

We were so proud of “our boys,” and so very glad we’d made the trip – no easy feat for 90-year-old bodies.

It was months after the trip, and the two brothers were still talking about it. They marveled at the parade, their time in the Officers Club. They displayed their certificates in a curio cabinet, next to the medals and dog tags of their other brothers.

They spoke of the pleasures of train travel and often repeated how magnificent the hotel and their hotel room had been.

Today, I watched the video footage of that hotel’s guests, who’d come to DC to support a President who doesn’t even respect them enough to tell them the truth, who took part, either passively or actively, in storming the Capitol, trespassing, vandalism, a violent insurrection. They’re just sitting there, sprawled around the lobby, chatting, having refreshments, rewarding themselves, having been convinced that their actions are somehow patriotic.

I think of the two Peck brothers walking into that fancy hotel lobby for the first time, looking up and marveling at its architecture, in awe of the experience, grateful to be alive to see it.

And I look at those hotel guests, and I want to tell them: Real, true patriots walked these halls.