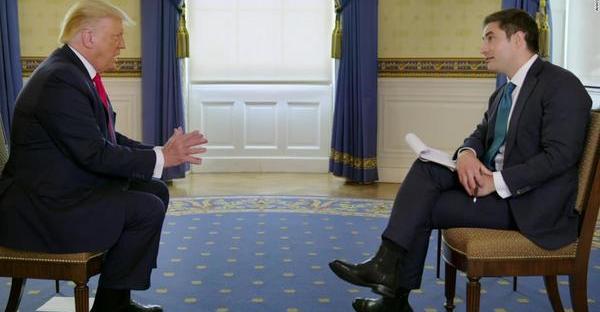 This AXIOS on HBO interview with the President is generating a lot of social media buzz this week. If you’re like me and out of the HBO loop, AXIOS kindly published it online, free of charge. Here’s the link:

I watched it pre-dawn, with my first three cups of coffee and a notepad for visceral scribbling. I was most interested to see how Jonathan Swan formulated his questions and delivered them, and how he “managed” the President – prone to ramblings and deflections – in order to keep the interview productive and moving forward.

At least twice, the President broke the cadence of the interview to comment on Swan’s facial expressions, accusing him of smiling or smirking. This, too, is a rhetorical trick of the President’s – to redirect attention to the questioner, often disparaging the reporter in some way. Here, he seems to imply that Swan is unserious or being cheeky. What he did not do is call Swan “nasty,” or dumb or any of his other favorite insults he seems to reserve for women journalists who ask tough questions.

Swan didn’t hesitate to wade into some turbulent waters: the Federal response to COVID-19; Ghislaine Maxwell; the President’s plans to leverage the Courts to contest the election; Federal forces descending on an American city and usurping due process by essentially kidnapping protesters and holding them without charges; Black Lives Matter and civil unrest; and about his lack of regard for the late John Lewis.

Swan even asked about the intelligence reports that suggest Russia has taken out bounties on Allied troops’ heads. The President demonstrated his incuriosity about the intel. “If it reached my desk, I would have done something about it,” he proclaimed.

“This one didn’t reach my desk,” he insisted. And yet it’s on his desk; it’s in his briefing, and the President didn’t even bother to bring it up for discussion during his call with Putin last week (per the White House).

It is stunning to see a President of the United States equivocating American troops – presumably sent to the Afghanistan mountains to combat terrorism and nation build – with Russia’s aggressive, invading forces the Taliban caused to retreat long ago.

Pressed on troop levels in Afghanistan, the President acknowledged that the numbers have gone up and gone down during his Presidency, but he insists that his mission is to nearly halve the level with which the Administration began. Swan, wanting a number and a timetable on the promise, gets the President to say the U.S. will have between 4,000 and 5,000 troops in Afghanistan on election day 2020.

Swan is particularly effective at getting the President to eventually answer a question. Someone on Twitter suggested that it’s because of the Aussie accent, but it’s really because he fires follow-up questions and real-time fact checks at the President. The White House Press Corps, often kept to one or two questions, don’t have that luxury. It’s too easy for the President or McEnany to just point to someone else and move on.

Throughout the interview, the President makes relentless attempts to stonewall Swan. He interrupts. He talks in circles. He deflects and heads off in tangents – often leading to topics within his comfort zone: Crowd sizes. TV ratings. And why he doesn’t get enough “credit” – from whom, he doesn’t say.

In a line of questioning may be more uncomfortable for the audience than it is for the President, Swan asked the question about his “I wish her well” remarks about Ghislaine Maxwell, the accused pimp and pedo-buddy of the late Jeffrey Epstein – both, long-time friends of the President. In response, the President suggested that Epstein may have been murdered in prison, citing no evidence to support his assertion.

What the President doesn’t want to talk about is the pandemic and the more than 159,000 dead Americans. When Swan does manage to steer the President to the topic, the President flippantly dismisses statistics, including the measurably important death-per-capita data from the United States and other developed nations. The President suggests that data is flawed.

The duo’s conversation about testing is revealing, in an emperor-lacks-clothes kind of way. The President’s obstinance about testing continues. Swan points out that test results take too long – that a test result, sometimes 10 days after the swabbing, doesn’t help the patient and it doesn’t help quell the transmission of the virus.

Weeks before the Swan interview, the Trump Administration “defunded” federal testing sites they’d set up around the country. They folded the tents, pulled the personnel, and said to those communities, “You’re on your own now.”

One of so many unforced errors made by the President during the interview, he asserted, “You can test too much,” citing unnamed sources, “the manuals” and “the books.” To his credit, Swan followed up with a question about which manuals and books he was citing – knowing, of course, that the President cannot answer the question.

The part of the interview about COVID-19 and testing will now be added to the library of videos of the President’s half-year campaign to diminish the virus, to give Americans some false sense of security, to fuel conspiracy theories about it, to play wannabe doctor and pharmacist, to endanger lives.

The national lack of ambition on testing – despite the volume of tests already performed the President prefers to cite – may be our undoing. It should go without saying that the more rapid-result testing we do, the easier it becomes to isolate the virus, identify risks, to help on-the-front lines healthcare workers and facilities be proactive rather than reactive. The path to any sort of normalcy – schools reopening, businesses bouncing back, seeing each other, touching each other, encouraging the kids to play together again, going to a restaurant, going on a date, seeing live music, attending a funeral – is paved in testing.

And we’ve blown it.

About those nearly 160,000 American deaths? The President tells Swan, “It is what it is.”