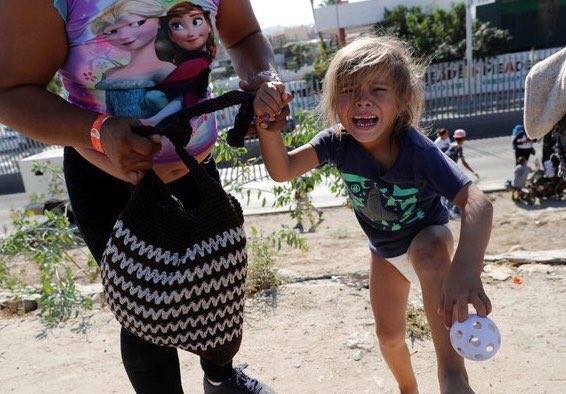 Here I sit, finally still, settled — fat and happy over Thanksgiving and family and friends and reconnections and relative good health … and then my wire alerts blow up, and this photo scrolls to my screen.

This is a child who came to the border from who knows where. She is barely clothed. She may lack shoes; it’s a little difficult to say for sure. She clings to a toy ball, perhaps a thing of comfort, perhaps a small reminder of normalcy during the arduous journey. What must she have seen and endured during that trek?

She is held by an adult, presumably. A mother? A guardian? An auntie? A stranger? The woman wears a too-small shirt, her stomach spilling out, the arm holes taught. It depicts a Disney tale she likely hasn’t seen. Where is her own shirt, the one that would fit her? Who is she?

What daily hell did they flea?

They likely embarked on the journey because they were told to. Not by any Soros-esque bogeyman, but perhaps by other local activists or news anchors or through the exportation of our national pride. We tell the world: This is the place to be. We are the shit, man. You want to be here, because we do all things the best. Look at our liberties. Look at our freedom. Look at our diversity. Look at our might. Look at our opportunities. Look at our Kardashians.

Perhaps someone told them along the way that it is within their Right to plead for asylum once they reach the border — that our laws entitle them to that appeal, though it may be a long-shot and especially given the current Administration. Perhaps they carried some of that hope with them along the way, as they bartered away materials things or worse.

And so they walked the miles and endured the exploitation just to get to that border. And our government orders armed troops to pelt and poison them with teargas.